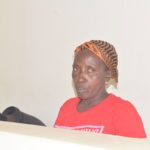 A woman who is reported to have stormed her uncle’s home and assaulted him was charged at Kibera law courts with causing him actual bodily harm. Wangari Wanjiku is accused of beating up John Njoroge at his home in Manyatta village, Dagoretti in Nairobi on January 13, 2022. Njoroge was at his home when the suspect allegedly stormed the home while drunk and started hurling insults at him. He called his sister, the suspect’s mother, who came with another person while armed with stones and joined the suspect in allegedly assaulting the complainant. Njoroge raised an alarm and members of the public intervened and rescued him. He was helped to go to a hospital for treatment before he reported to police at Mutuini police station. Ms Wanjiku denied the charges before senior principal magistrate Philip Mutua. She was released on a cash bail of Sh20, 000. The case will be mentioned on April 6.