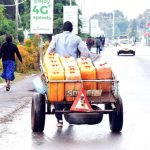 Several estates in Nairobi will go without water on Thursday and Friday as a result of a complete shutdown of the Ngethu Water Treatment Plant. Nairobi City Water and Sewerage Company (NCWSC) Managing Director Nahashon Muguna said the shutdown was due to a major leakage on the raw water pipeline from Mwangu water intake. “The Nairobi City Water and Sewerage Company would like to inform its esteemed customers that a major leakage on the raw water pipeline from Mwangu water intake along Chania River to Ngethu water treatment plant which will necessitate complete shutdown of Ngethu Water Treatment Plant on Thursday, 10 March to Friday 11 March, 2022,” said Muguna. The organization said that every effort will be made to restore the supply of water as soon as possible. “We request all customers in the affected areas to use water sparingly during the period of interruption.” https://twitter.com/NairobiWater/status/1501420444549021699?s=20&t=TVsDzdnUAbxHlOLimkmmvQ The entire City Centre, University of Nairobi main campus, Coca-Cola Factory, Jomo Kenyatta International Airport, EPZ- Athi River, and areas along Mombasa Road: South B, South C, and their environs are among the areas affected by the outage. The entire Industrial Area and Upperhill, as well as areas along Juja Road: Mulango kubwa, Mathare, Eastleigh Airforce Base, Huruma,Kariobangi, Pangani, and Eastleigh, will be affected. Areas along Jogoo road, such as Maringo, Bahati, Buruburu, and the surrounding estates, as well as areas along the Outer-ring road, such as Baba Dogo, Dandora, Dandora KCC factory, Umoja 1 & 2, Donholm, Fedha, Tassia, Avenue park, and Nyayo, will also be affected. During the repairs, areas along Kangundo road such as Ruai, Kayole, Komarock estate, and Njiru will also be cut off from supply. Areas along Thika Road will also be affected, including Kenya Breweries, Kenyatta University, Kahawa Barracks, Kasarani, Mwiki, Kahawa Sukari, Garden Estate and Thome Estate The interruption of supply will also affect parts of Limuru Road, Langata Road, Kikuyu Road James Gichuru Road, Waiyaki Way, Riverside, Westlands, Lavington, Kilimani and Kileleshwa. “We appeal to our customers for indulgence and also urge them to use available water sparingly as we work towards restoring the supply,” Muguna said. In 2020, Ng’ethu treatment was forced to shutdown for two days to stop the flow of untreated water into homes. “There has been increased river flow causing high turbidity in the raw water which is flowing slurry (semi-liquid mixture of suspended particles in water) suspected to be caused by a landslide upstream,” a statement from the company said the. In January, the water treatment plant was partially shutdown for repairs to allow its engineers to repair works at Mwagu water intake along Chania River. Nairobi has been experiencing water rationing since April 2017, forcing most residents to turn to water from boreholes or those supplied at exorbitant prices by water vendors. The Ng’ethu water treatment works serves 85 percent of Nairobi County.