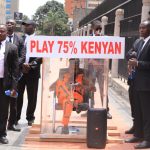 Eric Omondi has again caused an online stir after sharing a video of himself burning what appeared to be a laminated copy of his national identity card. https://twitter.com/osorojnr_/status/1503977242002702336?s=20&t=pWDpyYN4NiRr9b4aI5c-Wg The incident comes a few days after he vowed to lead the youth in what he said was a revolution. While burning the crucial identification document, the 40-year old, who is known to consistently chase clout, also gave an ultimatum to opposition Raila Odinga and Deputy President William Ruto, who are considered favourites to win the August 2022 presidential election. The former Churchill show funnyman has asked the two politicians to invite him for talks on the agenda for the youth. “This time round they will listen to us by force by fire. Five days to go and if Raila or Ruto doesn’t give us a clear plan for the youths then we will be forced to take very radical actions.” Omondi has also threatened to rally the youth to boycott the forthcoming elections by burning their voters’ cards and national IDs in protest. “The young people of this nation have been in chains since independence. We have to break free. We have to change the narrative. We must take back the country by all means.” This is the umpteenth time Omondi is attempting to go against the grain. He recently chained himself at Parliament in a supposed protest to influence media houses into airing more local content. He’s also staged a verbal fight against musicians on social media including Sauti Sol’s Bien.