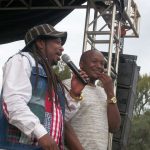 Mike Sonko has excited Kenyans on social media after he was spotted dancing his sorrows away at an entertainment joint. The flamboyant politician, known to enjoy the finer things in life, can be spotted in an undated TikTok video shaking a leg while in a completely happy mood. He is in the company of two ladies, one of whom appears a twerking specialist. The former governor seems to be enjoying a wild dance from the lady who was donned in a white top and black silk tight, so much that he parts with a few wads of cash. Known for his glitzy lifestyle, flashy clothes, and expensive jewelry, Mike Sonko has made a name for himself over the years as a lover of finer things in life. The embattled politician is known to have opened a number of entertainment joints at the Coast. He’s previously also owned a number of night clubs in Nairobi’s Buruburu estate. But things have not been looking up for Sonko, as he was impeached by both the Senate and Nairobi County Assembly members on allegations of corruption in 2021. He has also been dragged to court to answer to these charges even as he, alongside his close family members were recently banned from visiting the United States of America owing to suspicions of corruption dealings. Sonko also recently courted controversy  after he released a video that exposed a woman’s private parts without her consent, in a bid to supposedly prove that Kenyan courts and a select number of judges are corrupt. https://twitter.com/unclehustlers/status/1506284532248596489?s=20&t=FZBSSpJ4hLrfDS7xhGZ77g