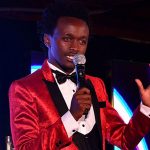 Bahati has dropped a new hit alongside seasoned politician Raila Odinga. The hit dubbed Fire has been received warmly by Kenyans on Twitter, garnering 30,000 hits within the first day of it being uploaded on YouTube. Odinga is considered favourite to succeed President Uhuru Kenyatta ahead of the August 2022 polls. In the three-minute song, Bahati, known for other hits such as Adhiambo, Barua, Mama describes Odinga as an astute leader who’s helped in developing the country. Raila severally chants the word “Fire” in the song, a term he uses to charge up the crowd at his rallies. “I told you this is historic! I took Hon Raila Amolo Odinga to the studio for the first time and we made the collabo of the year. Now on Youtube we premier the official music video so jeshi ya Bahati na jeshi ya Baba enjoy.” Other politicians making an appearance in the video include Mombasa and Machakos governors Hassan Joho and Alfred Mutua respectively, plus Embakasi East Member of Parliament Babu Owino. This is not the first time Raila has tried his talents in the music industry. In February he featured in a song by popular musician Emmanuel Musindi titled Leo ni Leo. In the video, Odinga is seen performing alongside the musician in front of a troupe of backup dancers while clad in a bomber jacket of Kenyan flag colours. Raila later ushers in the second stanza of the song with a heavy baritone tone before the other band members join in. Odinga has pledged to work closely with the youth whom he describes as drivers of the economy. It comes months after the seasoned politician met artists in Muranga at the home of businessman SK Macharia to discuss issues affecting the entertainment industry. He promised to work with President Uhuru Kenyatta to explore all opportunities that will turn artists into “respected talent investments”. https://www.youtube.com/watch?v=hhtYFyMu3OQ