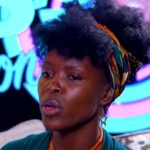 Actress Jacky Vike, popularly known as Awinja, has managed to easily achieve what many of her colleagues struggle to in a short period. Which is to garner more than a million views on YouTube. Awinja recently released her debut song titled Sio lazima which currently has 1.6 million views. It was the most viewed song on the social media platform in the past week. Those who’ve watched the song agree the actress was at her full element while employing her comic nature. Sio lazima which loosely translates to it’s not a must is a song in which Awinja encourages people not to force situations especially when it comes to love, work and life in general, “When I was coming up with the idea for a song, Valentine was not in my head but it just happened that it was during the Valentine period. There is always a lot of pressure around Valentine’s Day, for couples and singles. It is not a must for a man to send flowers to a woman. Sio lazima is my everyday attitude for all I do.” “People should communicate and be honest. A lot of guys are working but they are not happy with what they do. Or are in abusive relationship but maybe are afraid of coming out from them for fear of being criticized by society Awinja who made her name as the nosy, meddling househelp famous for her role in the popular local television series Papa Shirandula adds the move to switch to singing caught her fans by surprise. “It is a feel good music and I loved creating it, I had a lot of fun. In the video you see Awinja being her true self. I was being guided by the beat. If you listen keenly you will notice that it has some Isikuti vibe but modernised. I am blown away with the response the song has received. “And for those asking whether I have switched from acting to singing all I can say is that I do not know what the future holds. When the character Awinja was created she knew that at some point in her career she was going to do something like this. It is a testament to how versatile her character is as a content creator,” Her song joins the list of a new trend of music that is being produced by new entry artists that some may dismiss as not being good music. Former gospel singer Bahati’s wife Diana Marua recently launched her career in music with a rap song “Hatutaachana tu”. The song was met with mixed reactions with a majority expressing their disapproval. “I have joined the music industry just to try something different, because in growth, in anything you strive to do, you should strive to get to the next level every other time. I wasn’t sitting down doing vlogging and content creation for me to remain there forever. You have to spread your wings. Content creation is what puts food on my table, among other things, so music is now my baby and I am not willing to let go of any one of them,” she explained. Her other song titled Mubaba is already at one million views on YouTube. Exray “Taniua” (Tony Kinyanjui) is also another artist who became an online sensation thanks to his song Sipangwingwi. The phrase has become part of daily conversations among Kenyans including the political fraternity. Exray during an interview said that he wrote the song, which was released last year, to be a feel-good tune. He claimed he was inspired by the questions he was receiving as an artist. “People kept telling me, ‘When will you release your next song? When will you do this and that?’ So, there was some pressure from the questions from people. So, nikaamua basi, mi nitatoa ngoma siku ile nataka; so sipangwingwi (I decided to release music when I want, not as per anyone’s plans),” Exray said. Sipangwingwi is currently at 5.5 million views on YouTube.