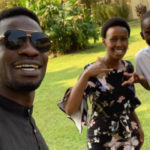 Was Bobi Wine’s High School going son found in possession of drugs at school or was he framed? Either way, this and another incident that occurred at St. Mary’s Kisubi College in Kampala, an institution commonly referred to as SMACK, has led to the popular Ugandan politician and musician claiming the school’s administration is targeting his son. The incident with drugs reportedly occurred in 2021, and according to Bobi Wine, real name Robert Kyagulanyi, his son informed him that someone had planted the drugs under his bed. “We (Bobi Wine and the headteacher) had agreed everything remains there without anything leaking out and that’s why I never said anything to the public even when I have plenty of access to the media as you all know. Since it’s the head teacher who recently spoke to the media, let me also make my case,” said Bobi Wine, during a speech at a parents meeting which was captured on amateur video. Bobi Wine, who contested against Yoweri Museveni for the country’s presidency, adds that Br Deodati Aliganyira, the school’s headmaster was the mastermind in framing his son’s suspension that captured national imagination. SMACK, a partially government-aided school on February 1 slapped Sekayi, a teenager with a two-week suspension for acting contrary to the school’s policy on ‘zero-tolerance for indiscipline.’ Nevertheless, the matter was solved between his parents and the head teacher, complete with a gentleman’s agreement that the matter should remain private. But it was soon all over the media. In another incident, Bobi Wine, also a pop star singer, says his son was denied a chance to become a student leader because the headmaster termed his son as an average student. “That young man had been reporting to me a pattern of segregation and targeting on him. When all these issues came up, the head teacher told me that for a child to be a leader in this school, he must be an A-student and not an average student like my son,” Bobi said. Angered by the move to bar his son, Bobi Wine unleashed more revelations pertaining the school allegedly saying that Br Aliganyira told him that students that were overly popular were not allowed to run for office in the school. However, a couple of people shared their views on Twitter regarding incidences surrounding Bobi’s son and this is what they had to say; https://twitter.com/BrianAtuheire/status/1505461933968969728?s=20&t=mQ82e6JkPn2gCZpnZzcVRg https://twitter.com/BamweyanaMulalu/status/1505460812051533824?s=20&t=mQ82e6JkPn2gCZpnZzcVRg https://twitter.com/KayabulaE/status/1505580814607818761?s=20&t=mQ82e6JkPn2gCZpnZzcVRg https://twitter.com/Ankunda_Barbie/status/1505455408760168449?s=20&t=mQ82e6JkPn2gCZpnZzcVRg https://twitter.com/HaruzLearnz/status/1505470962443161603?s=20&t=mQ82e6JkPn2gCZpnZzcVRg