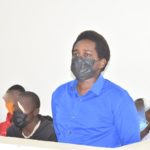 A university student has been charged at Kibera law courts with causing grievous harm to his neighbour. Andrew Kipkoech is accused of causing the injuries to Ann Kathure at Civil Servants estate in Langata, Nairobi on January 30. Kipkoech was hosting a party for friends and was reportedly playing loud music. Kathure requested he reduces the volume of music to allow her and her children to sleep. She started recording a video of what was happening at the party as evidence that there was one because she suspected Kipkoech’s parents will deny there was loud music from their house. But this did not go well with partygoers who demanded she stop recording them and one of them allegedly attempted to grab Kathure’s phone but she evaded it. Kipkoech allegedly grabbed her by the neck from behind and slammed her against a car parked next to the house. She sustained injuries on her abdomen. At the court, Kipkoech denied the charges before senior resident magistrate Renee Kitangwa. Through a lawyer, Kipkoech claimed the matter arose from a petty difference and that they have been good neighbours. He pleaded for leniency saying he is a university student living with his parents and added that he is not able to interfere with the case. He pledged to abide by any terms to be given by the court. He was released on a Sh100, 000 bond and an alternative cash bail of Sh50, 000. The case will be mentioned on March 24.