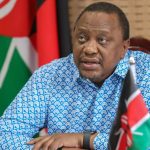 President Uhuru Kenyatta has ordered a crackdown on all bodaboda operators across the country. The order comes a day after sixteen bobaboda operators were arrested in connection with an incident where a female motorist was abused and sexually harrassed. Kenyatta also ordered all bodaboda riders to be registered afresh while at the same time cautioning leaders against politicizing the issue. Speaking at the International Women’s Day celebrations at the Kenya School of Government in Kabete, President Kenyatta said the crackdown should not be seen as targeting small businesses but to restore sanity in the sector. “I want to refer to the video circulating. It was disheartening and it was only one of these incidents shown. I have ordered a crackdown on all bodaboda operators starting here in Nairobi and moving across the country. I know we are in the busy season of politics, and some will say the government is harassing small business owners. There is no such thing,” he said. In a related development, 100 bodaboda riders were on Tuesday arraigned at the Milimani law courts in Nairobi for flouting various traffic rules. Appearing before Senior principal magistrate Esther Kimilu, the riders were charged with riding a motor vehicle on or through pavements dedicated for pedestrian use only contrary to the law. Court documents revealed that they committed the offence on March 8 2022 at 9am along parklands road Nairobi county. The accused were each slapped with fines ranging between Sh30,000 and Sh35,000 each. Over 200 riders in Nairobi CBD have so far been arrested as a crackdown on the sector intensifies following the sexual assault of a female motorist along Wangari Maathai road. witness protection as investigations into the matter proceed.