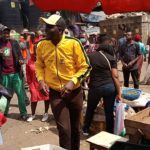 A section of United Democratic Alliance(UDA) leaders in Nairobi have disagreed with the findings of an opinion poll that suggests Raila Odinga is the most popular presidential candidate in the capital. The poll, released on Thursday by Trends & Insights for Africa (Tifa), indicates Odinga’s Orange Democratic Movement (ODM) political outfit boasts a 41% popularity rating. It is followed by UDA, Deputy President William Ruto’s political vehicle, with 30%. But then, Sam Mundia, an aspiring Member of County Assembly (MCA) for the CBD ward insists the polls are not accurate. “Ruto is more popular than Raila in Nairobi. He has more MPs. The polls are not transparent,” explained Mundia, who is set to contest on a UDA ticket. “We know of people who call you and say we are doing a survey, give us money and we will rank you better. I don’t believe in the polls,” he claimed. Mundia adds that a possible alliance between Nairobi senator Johnson Sakaja and Margaret Wanjiru will easily bag the Nairobi gubernatorial seat. There have been reports that these two politicians, aligned to Musalia Mudavadi and William Ruto, and have both indicated their wish to become the city’s next governor, could unite ahead of the August 2022 polls. Tim Wanyonyi, Richard Ngatia, and Ann Kananu are the other aspirants gunning for the seat. “They (Wanjiru and Sakaja) are good friends and working together will be a good changer. I would still back Bishop (Wanjiru) to win if each one of them goes on their own.” Mundia is the second UDA aspirant, after aspiring Westlands lawmaker Nelson Havi, to throw his weight behind Bishop Margaret Wanjiru for the Nairobi governor seat. Mundia has, meanwhile, vouched to push for affordable healthcare service, baby care facilities, and fair distribution of bursaries in his ward if elected.