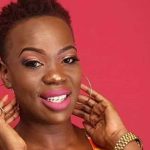 Singer Ruth Matete has opened up to the challenges she’s faced since her husband passed on. Matete, also a gospel minister made the reflections as the world celebrated International Women’s Day. The singer, remembered for her performances at the Tusker Project Fame reality show, said it was tough being accused of killing her husband. “My husband died two years ago after being married for 4 months. I was 2 months pregnant when he died. I dealt with multiple pain at the same time. Rumors that I killed my husband. Cyber bullying. Pregnancy emotions. Death of my husband. Burying my husband 3 months after his death because of issues surrounding his death. Corona. My business closing,” she explained on her socials. Matete lost her husband, Nigerian Pastor John Apewajole, on March 30, 2020 following a fire incident at their home. The trauma she received from bullies who were speculating the death forced her to temporarily delete her social media pages. The death was subject to a lentghy police investigation and at some point, the Nigerian High Commission in Nairobi also successfully sought orders to detain the deceased’s body so as to facilitate a private investigation. Matete and her deceased husband married in 2019 in a ceremony only attended by close friends and family members. In a recent interview, Matete revealed that she would want her daughter Toluwa to have siblings.