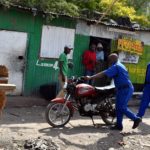 The government has temporarily halted the ongoing countrywide crackdown on bodaboda riders. This follows calls from various political leaders who’d voiced their complaints on the way the authorities had handled this four day operation. The move comes a day after opposition leader Raila Odinga announced he’d asked President Uhuru Kenyatta to pardon the bodaboda riders. “I’ve heard your pleas. I  talked to the President and the police will stop harassing the bodaboda riders,” said Odinga. Other leaders who also asked for a ceasefire in the stand off include Deputy President William Ruto and Homabay gubernatorial aspirant Glady Wanga. They argued only errant riders be arrested and made to face the law, but not all operators. The countrywide crackdown commenced when an incident showing a female Zimbabwean diplomat under attack from bodaboda riders in Nairobi went viral on social media, attracting a public outcry.