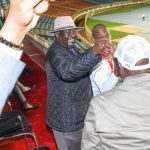 Raila Odinga will likely bag the most votes in Nairobi and Busia counties if elections are held today. But Deputy President William Ruto leads in Murang’a according to a report by Trends and Insights for Africa (TIFA) whose findings were released on Thursday at a Nairobi hotel. Odinga’s Orange Democratic Movement (ODM) political outfit boasts a 41% popularity rating in the capital, followed by Ruto’s United Democratic Alliance (UDA) with a 30%. A looming partnership between ODM and Azimio will further improve Odinga’s popularity in Nairobi as per the findings. Meanwhile, Johnson Sakaja is the most preferred gubernatorial candidate with 23% while Tim Wanyonyi, the Westlands MP, has 14%. Sakaja is the outgoing Senator. Incumbent Anne Kananu has 7% of the votes while newcomer Richard Ngatia is at 6%. Mike Sonko, despite fighting corruption scandals and being banned from visiting the USA has a 5% rating. while Bishop Margaret Wanjiru was voted for by 4% of Nairobi residents.