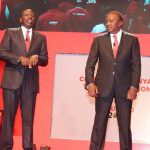 The political divorce between President Uhuru Kenyatta and his Deputy William Ruto is complete. The duo was elected in 2013 on a platform of hope while succeeding Mwai Kibaki and with a background of a myriad of promises to Kenyans. But with the divorce and their specific terms in office coming to an end, Nairobi News looks at some of the promises the duo failed to keep. 1. Unite Kenyans – The dynamic duo, as they were referred to as the time, assumed power while bidding to prove their innocence from charges against humanity levelled against them at the International Criminal Court (ICC). They, thus, promised to unite the country but have ended up not only accusing each other of economic crimes such as corruption, but also abusing each other in public. 2. Build five state of the art stadiums – The President and his Deputy made the promise, complete with graphical impressions of how these stadiums will look like. They also promised, on top of that, to ensure Kenya was able to host international sporting engagements. But alas, not even one stadium has been built. Worse, Kenya, in 2018, lost out on an opportunity to host the 2018 Africa Nations Championship (CHAN) event owing to, you guessed it right, lack of the required stadiums. 3. Laptops – Uhuru and Ruto also made a vow to supply each primary going school child with a laptop. That was not to be. 4. Paid internship –  In 2017, President Kenyatta unveiled an internship program that was meant to guarantee at least 100,000 new jobs for graduates every year. The graduates, absorbed by the government, and the private sector for a periods of 12 to 18 months would be paid. This project was to end cases in which graduates are denied jobs on account of lacking experience. That has never happened. 5. Jobs for youths – In 2020, President Uhuru Kenyatta stated that his government would create 100,000 jobs for the youth through the Economic Stimulus Package. This was in a bid to return the economy to the growth trajectory and increase demand for local goods and services, cushioning vulnerable Kenyans, securing household food security for the poor, and creating employment. That promise remains just that.