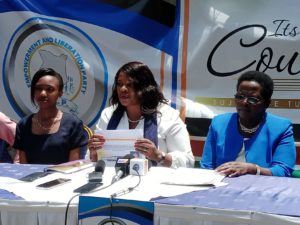 A presidential aspirant has defected from Ford Asili Party and joined Empowerment and Liberation Party (ELP) following a fallout with the party secretary general during a television debate. While arriving at the decision to quit the party, Grita Muthoni said it was such an embarrassing occurrence to be disowned by the party while on a Tv interview. “I was so embarrassed. I am a registered member of Ford Asili. What Njeru Kathangu did was not right. If they can disown me publicly, then in whose hands will others be safe? It only showed that there is no equality in the county,” said Muthoni. She will now be the presidential flag bearer of the ELP party that is headed by one Rose Mulwa. “I have resigned from Ford Asili. I was blasted during a live interview. Mr Kathangu declared publicly that I am not a registered member of Ford Asili yet I have my registration documents with me. I thank God that I have been warmly welcomed by Rose Mulwa, the ELP party leader,” said Muthoni. She has called on the public to be awake and not repeat the same mistake by choosing wrong leaders.