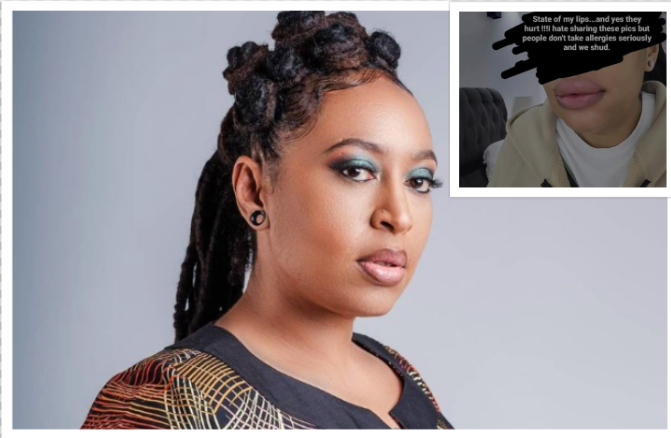 Rapper Nazizi has been hospitalized after developing an allergic reaction.

The Reality hitmaker says she was rushed to the emergency room on Monday after her tongue and face started swelling.

She received some treatment and decided to go back home something that was against her doctor’s wishes.

Her situation became worse and had to go back to the hospital. The allergic reaction she says has been caused after being exposed to a lot of house dust.

“I have had one of the worst allergy attacks ever. Monday night I was in the ER for about 6 hours. Earlier this year I found out I am allergic to house dust mites, pollen and grass. All environmental and hard to avoid in Africa,” Nazizi said.

Also read: Nazizi: How I overcame the toughest moment of my life

“So with the moving, I was exposed to a lot of dust and on Monday night I felt my tongue swelling, then my throat, these types of allergies can result in death.

Adam rushed me to the hospital and hours later I was back home against the doctor’s wishes.

I thought I will be fine, Tuesday morning I woke up with my whole face swollen and ended up back in the hospital again.

I have had so many injections I feel super weak and I look like I have had Botox. I am just glad I am alive,” she said.

Photos seen by Nairobi News capture the rapper in a hospital bed with her face all swollen up.

In one of the pictures, her lips appear to be double the size.

“State of my lips and yes they hurt. Hate sharing these pics but people don’t take allergies seriously and we should.

If you ever feel or see your face swelling up you have a serious allergic reaction don’t wait.

Just rush to the hospital, the worst could happen if you wait. The throat could close up and then Jah know what’s next,” Nazizi said.

The mother of two moved into her unfinished house six months ago and she has been overseeing the construction process.

Check out more entertaining tea below:

Ruto’s security officer hospitalised after being assaulted by gardener

How gangsters disguised as medics robbed doctors, patients in hospital