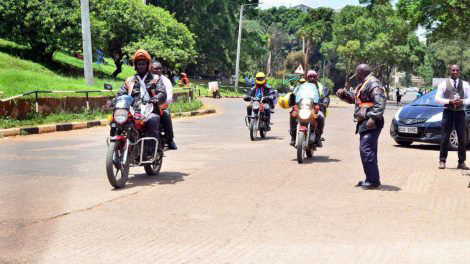 Policeon Tuesday arrested 200 motorbike riders in Nairobi as a crackdown on the sector intensifies following the sexual assault of a female motorist along Wangari Maathai road.

Inspector-General of Police Hillary Mutyambai confirmed more than 90 motorcycles have also been impounded. Those affected include bodaboda riders around the capital’s Central Business District (CBD) and its environs including Ngara, South B, Westlands and Parklands. A spot check in CBD by Nairobi News showed that there were fewer than usual boda bodas parked at the not designated slots.

Along Kimathi street next to the Stanley Hotel, there were only two motorcycles parked, on a normal day more than a dozen can be found there.

There were no motorbikes on sight at the Kencom bus stop, riders electing to ride along the road and see if a customer will flag them down.

At Hatika Road, KTDA along Moi Avenue, Temple Road, Railways Terminus and Haile Selassie Avenue only the brave parked their motorcycles. A traffic police officer who spoke anonymously said that there was an early morning crackdown along Khoja Mosque which netted more than two dozen motorcycles and a similar number of riders arrested.

According to the county laws, Boda boda riders are banned from operating within the city center with only those transporting goods being exempted. “Pursuant to the provisions of the Traffic Act CAP 403 of 2014 of the Laws of the Republic of Kenya, the Nairobi City County Government wishes to inform all motorcycle (boda boda) operators ferrying passengers to and from the Central Business District (CBD) that such activities have been banned with immediate effect,” Traffic Act of 2014.

A boda boda operator told Gotchscape Media there are a few rogue elements in our ranks, but does that mean they condemn the whole industry and banning their operations from the CBD is ill-advised. “The incident happened outside CBD, why are we being victimized, yes I know there are a few who misbehave but the majority don’t, this is our livelihood,” he said.

A section of city residents, who spoke to Nairobi News urged the government to offer the boda boda operators an alternative because it is the source of their livelihoods. “Yes they sometimes cause accidents and drive recklessly but they also have families to feed,” Joan Muriuki said suggesting to the authorities that “they should provide an alternative place to work or demand their retraining.” Boda boda riders have for a long time resisted efforts to eject them from the city centre and on several occasions have engaged county askaris in cat-and-mouse games. Additionally, boda bodas seem to be supplanting taxis as they offer cheaper services within the city centre, with a ride costing between Sh100 and Sh200, and hence making them the preferred choice of many people.