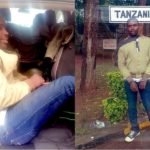 Zachariah Nyaora Obadia, the bodaboda operator who’s been identified by police as the mastermind of a gang that recently sexually harassed a diplomat has been arrested. He was arrested on Monday by detectives from Nairobi Area Operations at the Kenya-Tanzania border. The Directorate of Criminal Investigations (DCI), believes he was attempting to cross into Tanzania, a week after the uproarious harassment incident that sparked a nationwide crackdown on motorbike operators. “Zachariah Nyaora Obadia, the country’s most wanted suspect who has been on the run for sexual assault has been arrested. Obadia, who masterminded the ghastly sexual attack on a woman along Wangari Maathai road, has been arrested minutes ago at the Kenya-Tanzania border in Sirare,” DCI said in a statement. According to DCI, the suspect who’s been on the run since last week escaped their dragnet in Mukuru Kaiyaba, through a sewer duct. “Since then, he has been engaging detectives in hide and seek games until his arrest. Using digital forensics, cybercrime experts at the DCI National Forensic Laboratory, had earlier placed him at the scene of the crime scientifically, before launching a manhunt for him,” DCI said. https://twitter.com/DCI_Kenya/status/1503339390952747010?s=20&t=XvinY6c4B3Mb270jQ1P68w Obadia has been on the run since the incident with detective’s intensifying his manhunt by deploying teams across the city and to his rural home in Kisii. DCI had Obadia at the scene of crime, and a Nation analysis of the short but scandalous video footage showing the attack on the woman shows a man with a striking resemblance of him yanking open the door to the motorist’s Nissan X-Trail and groping her. Forensic analysis of the incident which occurred last week along Prof Wangari Maathai Road, formerly Forest Road, showed he was there at the time of the attack, even though he is registered to a boda boda association that operates from Hazina. The suspect is also said to have been positively identified on the video capturing the sexual assault incident by his wife and other relatives in his rural home.