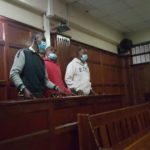 A pastor and two others have been charged with damaging a road by cutting guard rails along a main city highway. The man of cloth namely Stephen Mutunga Mutua was charged alongside James Maina Ngaai and Patrick Kariuki Manyengi. They denied the offence with state prosecutor telling court the offence was serious and thus the bail term should be commensurate. “Your honour I am a Pastor. I beg you to grant me bail not exceeding Sh5,000. That is all I can afford,” said Mutunga. He also told Milimani chief magistrate Wendy Kagendo Michemi he’d recently lost his mother. “Your honour I was arrested a week after burying my mother. Calamities have been dogging me. There was a huge hospital bill and now I am wrongly accused of sabotaging the work of a governments’ road agency-Kenya Urban Road Authority-(Kura) by vandalizing rail guards near Kenya Pipeline,” he said. The case comes weeks after President Uhuru Kenyatta warned those found sabotaging the economy by vandalising roads and other government property will be severely dealt with. But Mutunga insists he is innocent. He told court: “I was heading home after working at the church. I met police officers who arrested me thinking I was coming from the yard of Maina (co-accused). I am not a destroyer of roads guardrails. I respect the law.” Even after the lengthy mitigation for a lenient bail term, the trio was freed on a bond of Sh200,000 with one surety of similar amount.