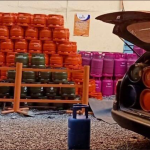 Kenyan households will have to pay more for the purchase of cooking gas. In the latest changes announced by Rubis Energy Kenya, the cost of refueling Liquefied Petroleum Gas (LPG) cylinders will be increased by at least 15 percent. “We wish to inform you that the LPG prices have changed for gas refilling effective 7th March, 2022,” a communiqué to all dealers dated March 4, 2022 read. A 6 kg gas cylinder will now go for Sh1,560, up from an average of Sh1,400. The cost of refueling a 13 kg cylinder is set to retail at Sh3,340, an estimated Sh300 increment, while the 35 kg will retail at Sh8,700 Further, Kenyans will part with Sh8,760 to refill a 35Kg gas cylinder up from Sh8,191 which is almost Sh600 more. Last year, the Kenya Revenue Authority (KRA) imposed a 16% Value Added Tax (VAT) on LPG. The tax charge pushed up the price of cooking gas upwards of Sh300 in most outlets. The Finance Act reinstated VAT on LPG but delayed the levy for one year to July 2021 amid concerns over high living costs and affected low-income earners, most of whom are out of work or struggling due to Covid-19 disruptions. For the past five years, Kenyans enjoyed low cooking gas prices after the Treasury scrapped the tax on LPG to encourage its uptake among low-income households. The latest increase comes as the war between Russia and Ukraine, which has sent global oil prices soaring is being felt across the globe given that Russia is the world’s second-largest producer of natural gas and one of the world’s largest oil-producing nations. The price of crude is expected to near $150 a barrel, according to JP Morgan, from the current $94.20, with traders worried that the geopolitical tension over Ukraine could cause disruption to Moscow’s fuel exports. According to the Business Daily, The prices of butane and propane—the by-products of crude oil used in the manufacture of Liquefied Petroleum Gas (LPG) — have risen in the past months on increased demand but low supply in the Gulf countries, which are Kenya’s main source markets of cooking gas. Industry data shows that the price of propane has jumped by 42.01 percent in the past three months to $1.27 (Sh140.33) per gallon while that of butane has risen by 28.6 percent in the period to $675(Sh74,587.50) per gallon. The impact of these price rallies is expected to be felt in Kenya in the coming weeks, adding strain on consumers who barely two months ago took a hit from the State imposing a 16 percent value-added tax on LPG, pushing the cost of cooking gas to a six-year high.