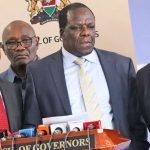 Kakamega Governor Wycliffe Oparanya has dismissed Amani National Congress (ANC) party leader Musalia Mudavadi as Deputy President William Ruto’s Spanner boy. Speaking at a political rally in Kakamega Oparanya explained he did accompany the Azimio coalition flagbearer Raila Odinga to his recent trip to the United Kingdom because he was busy looking for votes. “Raila was recently in the UK and I heard people saying no luhya leader accompanied him. I was here, working and looking for votes. Did you want me to accompany my leader over there and carry files for him the way Mudavadi was doing when he accompanied (William) Ruto to the UK and US?” posed Oparanya. https://twitter.com/ItsMutai/status/1505857945900363778?s=20&t=B335ZbnExu8j_EIVPD9juw Oparanya and Mudavadi are engaged in a rivalry over the leadership of the luhya community with the governor now close to Raila whilst the seasoned politician gunning for Ruto ahead of the August 2022 polls.