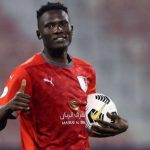 Kenyan forward Michael Olunga is all set to bag the Golden boot award in the Qatar Stars League (QSL) this season. Ahead of the final round of matches in the league, Olunga, attached to Al Duhail, has bagged 24 goals, nine more than Ghanaian forward Andrew Ayew. To deny Olunga the Golden Boot, Ayew needs to score ten times and hope Olunga fires blanks in the final matches of the season. Ayew will also need to beat the record for the most goals scored in a single match (seven) held by Algerian Baghdad Bounedjah since 2018. Olunga managed six goals in the 12-team league last season after joining Al Duhail in January 2021 from Japan’s topflight league side Kashiwa Reysol. Olunga also emerged last season’s top scorer in Asian Champions League with nine goals. The former Tusker and Gor Mahia striker has also won the QSL Player of the month for October/November this season and has scored six goals in the last three matches against Al Ahli. “Our match against Al-Ahli will be different. There will be a change in the squad for some players and there are new players that will participate in this match. There are also the young players and players returning from injury, and I cannot state the number of minutes each player will play. We will play the match to win against Al-Ahli which also wants to win and improve its position. The league is over for us and the result will not change our position but we want to win,” coach Castro told Al Duhail’s website. With the Amir Cup semi-final match against Al Sadd on March 14, Castro could be tempted to rest Olunga on Thursday