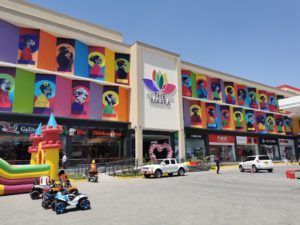 A Nigerian artist has accused the owner of Imaara Mall in Nairobi of copying and using his work without his consent. Temi Ololuwa Coker, a 29-year-old photographer, and designer, took to his social media account to share his frustrations after he saw some of his work painted on the mall. The artist has now threatened to sue the management of the Mall, saying it was the second case of copyright infringement he had witnessed in three weeks. “Soooooo (sic) this mall called the ‘Imaara Mall’ in Nairobi copied my work verbatim and put it on their mall. They straight up copied my style and are now using it for profit,” Coker tweeted. https://twitter.com/temi_coker/status/1499084069623279617?s=20&t=u91W8YcQxFeqqGeVHJBh8w He said that he does not mind people being inspired, but at least try and make it your own. Don’t go outright copy an artist’s style. “I started this style in 2019. I’ve gone through their page and they don’t mention the designer. I wonder why. My agency will be looking into this with their lawyers but honestly I don’t know if there’s anything that can be done. Maybe a cease and desist?” he added. “I create too often for that to even be a thing. This is wild but I guess I guess it comes with the territory. But I find the peace that I can’t be duplicated. However, I can be forever imitated lol.” He wondered why the mall had to find someone to copy vs coming up with their own concept. “Says a lot about them. And to add to the fire this is the 2nd time this has happened in 3 weeks. It hurts but we move.” Cooker is a graphic designer-cum-photographer based in Dallas, Texas. He was one of the seven Adobe Creative Residents for 2018/2019 and is widely known for his creative approach in photography and design. The management of Imaara Mall is yet to issue a statement.