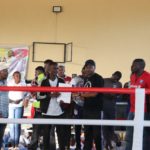 Anthony Waithaka has urged upcoming boxers in Nairobi’s Eastlands estate to work hard and bring back the old glory in the sport. The businessman who is eyeing the Makadara parliamentary seat spoke at the weekend after donating a boxing ring at Makadara sports club. “I have been supporting sports for many years and I know the biggest huddle for any boxer or boxing club is a boxing ring Sports is the largest employer of the youth today,” he explained. “The ring will be managed by representatives of Makadara clubs and I would urge you to maintain it well and share it equitably.” Locals will use the ring for free, but outsiders will be charged a fee with the proceeds used for the ring’s maintenance and promote boxing in Makadara constituency. Kenya was once a renowned nation on the boxing field, with Wangila Napunyi’s Gold medal at the 1988 Olympics medal the highlight. He remains on the few boxers in sub-saharan Africa to achieve this feat. There have also been exceptional performances from Conjestina Achieng and Fatuma Zarika but largely Kenyans boxers have struggled to make an impact on the continental and international scene. In a tournament, dubbed Anthony Waithaka Boxing Championship staged at the venue, Nairobi City County (NCC) and Mathare 4 N tied 2-2 to share the top honours.