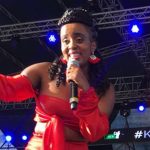 Kenyan songbird Nadia Mukami has opened up on how difficult her pregnancy was, adding it was among the reasons she decided to keep it private. Speaking at an event in Nairobi, the singer alongside her boyfriend Arrow Bwoy disclosed how she’d been having a hard time. ” I had a poor appetite because of constant vomiting, I’ve been admitted to the hospital severally, and the reason I didn’t want to say it was because I wanted to be okay, for me to be able to tell people that I’m expecting my bundle of joy,” she explained. “You know people were saying that I was hiding my pregnancy but there’s nothing like hiding pregnancy, it’s very personal and you just have to wait until you are ready to talk about it,” she said. Arrow Bwoy also praised his girlfriend for being strong throughout the pregnancy, adding that he was supportive of her despite the challenges. He also revealed that they lost their first child, a girl, which left them broken and it’s in her honor that they have launched the Lola and Safari Foundation. “She’s a fighter, first of all, she does not give up. Her resilience made me want to stick by her side through thick and thin. We lost our first child, it was hard and we were confused,” he said. Nadia also explained her boyfriend had been quite supportive and understanding through it all. “He’s been there through thick and thin, he’s never missed a clinic. He has been there for me even when my hormones were misbehaving, he would still stick around.” Lola and Safari are derived from the names that Nadia Mukami and Arrow Bwoy were supposed to give the child they lost. Lola and Safari by Nadia Mukami and Arrow Bwoy is a Foundation targeting young girls and mothers who have challenges with pregnancy, childbirth, postpartum depression, and those that cannot afford maternity health care and also coming up with a proper financial plan. The Foundation also focuses on teenage girls who have dropped out of school due to early pregnancies and offers sensitization to young girls on planned pregnancies with the hashtag, ‘IT CAN WAIT’.