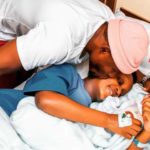 Celebrity couple Nadia Mukami and Arrow Bwoy are the newest parents in town. The musicians welcomed their baby Haseeb Kai on Thursday 24/3/2022. In an Instagram post, Nadia ushered her child to the world, “Welcome to the world Haseeb Kai @haseebkai 24/3/2022.’ Hours after the announcement, the young one had generated more than 4k followers on Instagram. News of their pregnancy was first revealed first by media personality Felix Odiwuor aka Jalang’o, but Nadia would later indicate she suffered a miscarriage. Months later, during the launch of their foundation Lola na Safari, Nadia arrived while heavily pregnant. However, her fans called out on her for hiding the pregnancy but in her defence the Maombi hit maker said, “You know people were saying that I was hiding my pregnancy but there’s nothing like hiding pregnancy, it’s very personal and you just have to wait until you are ready to talk about it.” A week after the foundation launch which was a tribute to their late daughter, Arrow Bwoy born Ali Etale engaged his lover Nadia. The elated Nadia while showing off her ring said, “I said yes to the love of my life @arrowbwoy.” The proposal went down during the official launch of Arrow bwoy’s album titled Focus. The Radio Love hit makers have not been shying from posting each other occasionally. Two days before she gave birth, Nadia revealed the gender of her baby. “Mama Boi na Baba Boi. This phase of my life is beautiful. I have dedicated this Sunday to thanksgiving: I can’t believe my prayers have changed to God protecting my Boys. (Boi & Baba Boi).I am loving & appreciating it. When you let God align, you just smile every day,” she wrote on Instagram. https://ift.tt/yXZ0Y6r