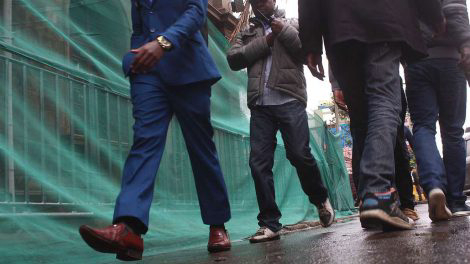 Love, it is said, makes the world go round and it’s no different in Kenya. But then, most relationships in Nairobi have their fair share of challenges with women having so much to share after heartbreaks.

Here are some of the types of men a lady in Nairobi will likely encounter.
1. Mubaba – We all know of that one babe on Instagram who once you visit her page, you start to question the whole point of your existence. She neither has a job nor an income generating activity but posts these fly pictures of her in prime destinations across the world.
Some of us wish to be her, some of us are jealous of her but all of us know that she is out here emptying a much older man’s bank account.
That man is simply known as Mubaba who appears to be keen to spoil her side lady in exchange for good times.
But there is no talk of settling down because he likely has a wife and grown-up kids.
To their credit, Wababa (plural for mubaba) have contributed to the GDP of this country.
Some of the clubs in Nairobi would have long shut down were it not for wababa spoiling their babes with expensive alcoholic drinks and shisha on weekdays and weekends.
Sadly, to maintain control, most wababa don’t hand out hard cash, they will pay all bills but leave babes’ pockets dry. One city babe was utterly embarrassed when her mubaba left her stranded in Diani after an argument broke. She had to turn to friends who had just seen her flamboyant posts a few days earlier to borrow bus fare to return to the city. On arrival, she went to his house to apologise in an attempt to save her house rent only to find her replacement settling in. In January 2020, Kenyan socialite turned business woman Huddah Monroe in one of her IG Insta stories admitted that the older men she dated for money treated her badly and disrespectfully compelling her to change her lifestyle. Wababa have options, proceed with caution before engaging them.
2. Twitter Swindlers – From Netflix’s Tinder Swindler Israeli conman Simon Leviev, to the Kenyan version namely Emmanuel Gift Masinde, it’s become apparent that some men will go to any lengths to live off of a woman in the name of love. One common excuse used is a need for emergency loans that will be repaid promptly which couldn’t be further from the truth. For naïve girls, spotting a con can be quite difficult. He checks all your boxes of your perfect man. He looks good, has a well-paying job, has a house and even drives a big machine. By far, this is probably the worst form of heartbreak that you can experience as a city girl. Your friends will judge you and shame you once you come out and admit that you were conned by a man as if they don’t know how far a woman can go for the sake of love.
3. Community Omuhusband – Many times, your girlfriends will be the first to notice that you are in “a per person sharing” relationship but of course you will deny it. But deep down you know that there are the red flags that you are ignoring. He disappears every now and then for a number of days without explanation only to return. He never picks his calls in your presence and there is a lot of unnecessary secrecy surrounding his phone. Artist Bensoul in one of his songs describes Nairobi as a big bedroom that is shared by many and true to the tune he recently admitted to cheating and getting the other missus pregnant. Canadian-American professional basketball player, Tristan Thompson has been accused of cheating on media personality and socialite Chloe Kardashian with several women with the biggest scandal being with Chloe’s close family friend Jordyn Woods.
4. Friends with benefits (FWB) – Whilst the debate on whether men and women can just be friends ensues, some girls actively seek out men for the purpose of warming their beds especially in the colder seasons when duvets and hot cups of coffee are not sufficient. The problem comes when one party, usually the woman, develops feelings. Suddenly you want girlfriend treatment, constant calls, flowers and other goodies and commitment. Some girls go as far as leaving their personal items over at his house as a way of marking territory which was never a part of the agreement. A good sign of knowing that you are not suitable for this type of relationship is if you cry when your watch soap operas. If you get easily attached to people and things, protect yourself, this is not the relationship for you. However, if you’re lucky it may end up in marriage as it did with Hollywood stars Mila Kunis and Ashton Kutcher who attempted but failed in their FWB relationship.
5. Married men – Dating married men is not a new phenomenon. Some ladies come into the relationship unaware that they are married but others do it knowingly. Some of the most public relationships involving married men include Anita Soina who admitted dating Terence Creative, Karen Nyamu who shares a baby with musician Samido and Comedian Jemutai who sired two children with Professor Hamo, not forgetting socialite Amber Ray who dated Jimal Rohosafi. In many cases, the married man usually “sees the light” and returns to his wife leaving the girlfriend in emotional turmoil. American comedian Kevin Hart is still with his wife Eniko Parish even after multiple reports surfaced in 2017 that he cheated on his then pregnant wife. Unfortunately, even after this relationship ends, it usually takes a long time for the title of homewrecker and husband snatcher to fade. Unless it is an emergency steer clear of married men unless you have enough tissue papers to wipe the premium tears that are loading