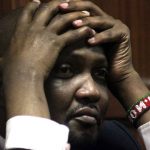 Moses Kuria is known for many things, including his loose mouth. Down the years, the Gatundu South lawmaker has used not so pleasant words to pass over messages to the general public, at times bordering, perhaps on the brink of excitement. Not even summons by authorities, a night behind bars, court summons, et al, appear to calm down the man who recently had to spend months in hospital treating his legs after a home accident. So which of these utterances by the seasoned politicians stand out? 1. Raila cries like a dog – Raila Odinga seems to be the man Kuria reserves his best (or worst) utterances towards. While addressing a recent campaign rally in Central Kenya, Kuria, whom, incidentally, is President Uhuru Kenyatta’s Member of Parliament, described the opposition leader as a man ‘who cries like a dog’. He said: “You (Uhuru Kenyatta) won’t choose a leader for us. Even though he is choosing a leader for us, Uhuru thinks we are all fools to the extent he brings us that person who cries like an old dog.” 2. Rigging claims – Speaking at the United Democratic Alliance (UDA) delegates conference, Kuria suggested he’d helped President Uhuru Kenyatta and his Deputy William Ruto rig elections in 2017. “There are those saying the Mount Kenya votes will be divided. We are the ones that used to help Uhuru win elections We are the ones that stole votes for him,” he said. He would later deny he said that, but the damage was already done. 3. ‘Cursed Uhuru Kenyatta’ – The second term lawmaker has also found time to declare President Kenyatta risks a curse if he supports Raila Odinga to succeed him as President. “Uhuru is going against his father’s wish by supporting Raila Odinga and he knows what Kenyatta said. We even took an oath never to support Raila for the presidency and that is why we are backing Ruto,” he claimed. 4. Swears at a journalist – Kuria is remembered for swearing at NTV journalist Kennedy Mureithi in unclear circumstances. Footage available on social media shows Kuria lamenting he is normally targetted for blame by the media before swearing and walking away. https://www.youtube.com/watch?v=7xdm0Ttmpoc 5. Christopher Msando claim – Perhaps the highlight of Kuria’s utterances was when he claimed in 2017 that Cristopher Msando, the Independent Electoral and Boundaries Commission (IEBC) ICT manager was spending ‘some nice time with a woman’. Only for Msando to be found murdered a few hours later. His killers have never been arrested.