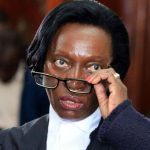 Martha Karua has teamed up with Raila Odinga ahead of the August 2022 polls. The Narc Kenya party leader made the announcement at a Nairobi hotel on Wednesday. Karua has been part of the One Kenya Alliance  (OKA) coalition which brought together other politicians including Kalonzo Musyoka and Gideon Moi, who chair the Wiper and KANU political parties respectively. Karua explained she’s decided to support Odinga because he’d demonstrated leadership contribution to Kenya’s democracy. “All sides of the political divide have people who looted [the country’s coffers] in the past. All sides have people who do not believe in the rule of law, and all sides have good people,” she said. Karua’s entry into the Odinga’s Azimio la Umoja alliance means all the OKA principals are now supporting Odinga’s presidential bid. Odinga will come up against Deputy President William Ruto, considered his toughest challengers, in the polls.