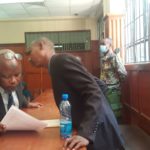 A driver at the Mandera County government has been sentenced to life imprisonment after he was found guilty of helping Al Shabaab kidnap two Cuban doctors working in Kenya. The doctors namely Dr Assel Herrera Correa and Dr Landy Rodriguez Hernandez were kidnapped by Al Shabaab militia in 2019 in Mandera County in the company of the driver namely Issack Ibrein Robow. The 42 year old father of 11 was handed the life term by Milimani law courts senior principal magistrate Ms Martha Nanzushi. Ms Nanzushi ruled that Robow aided Al Shabaab militia to abduct the two Cuban doctors. The terrorists brutally killed an Administration Police Officer Mutundo Katambo who was offering escort duties to the foreign medics. In her sentence Ms Nanzushi said the kidnapped doctors will permanently live with the incident since they brushed shoulders with death. The traumatized doctors were freed after a one-year detention period by the Al Shabaab terrorists. They have since returned to their motherland. Ms Nanzushi who in February 2022 convicted Robow said the terrorism act denied the residents of Mandera County the health services of the Cuban doctors. The magistrate said terrorism has destroyed lives, buildings and world economies. “Since the kidnapping of the two Cuban doctors, no other medics have been seconded to the health facility,” said Ms Nanzushi. Ms Nanzushi said the prosecution led by Harrison Kiarie has proven beyond reasonable doubts that on April 12, 2019 around 9am within Mandera Town, Robow committed a terrorism act which resulted in the heinous and brutal killing of APC Mutundo Katambo attached to the Critical Infrastracture Protection Unit (CIPU). In addition, he was also escorting the two foreign doctors attached to Mandera County Hospital. Robow faced five counts of committing a terrorism act, kidnapping and holding hostage two Cuban doctors, abetting commission of an offence and obtaining a national identity card irregularly. He was found guilty of all other counts apart from the fifth charge of being unlawfully in Kenya. For the first count of commission of a terrorist act, he was handed a life sentence, while for the second count of kidnapping the court slapped him with 25 years behind bars. The accused was further jailed for 25 years for aiding the terrorists and leading to the death of one police officer while for obtaining irregular registration he got a six-month jail term. The accused through his lawyer Chacha Mwita had earlier mitigated that he was remorseful and sought a none custodial sentence. But state prosecutor Harrison Kiarie had called for a stiff penalty saying the acts of the accused threatened the cordial relation this country had with Cuba.