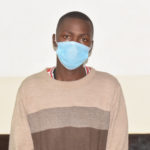 A 21-year-old man accused of snatching a mobile phone from a woman as she left a nightclub at 1am has been charged with theft. Stanley Wangare is accused of stealing the phone worth Sh11, 499 from Bilha Nasieko in Langata on March 3. He committed the alleged offence with an accomplice at large. Nasieko was leaving a bar at 1am in the company of her friends and while standing outside the bar in Southlands slums, they were joined by two men who approached and started talking to them. Later, the suspect allegedly knocked her hand and grabbed the phone, and ran away with it. However, Wangare was caught while fleeing but he gave the phone to his accomplice who fled with it. He was detained by members of the public until police were called in to arrest him. The phone was not recovered as Wangare’s accomplice allegedly vanished into the slums with it. Wangare was arraigned before senior resident magistrate Charles Mwaniki where he denied the charges. He was released on a bond of Sh50, 000 and an alternative cash bail of Sh10, 000. The case will be mentioned on March 17.