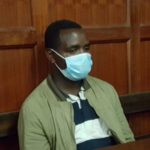 The 17 boda boda riders arrested in relation to an attack of a diplomat three weeks ago will know their fate on March 28, 2022. Two Milimani law courts magistrates Robinson Ondieki and Gilbert Shikwe were told the investigation file has been forwarded to the Office of the Director of Public Prosecutions (ODPP) for perusal and advise whether to charge them or not. The magistrates heard the Inspector Lyvonne Mwanzia has completed the investigations into the case and has since forwarded the file to the ODPP for perusal and advise. Insp Mwanzia urged the magistrate to give the ODPP five days to complete the exercise. “The investigating officer Insp Mwanzia has completed investigations into the incident. She has recorded witness statements. She has forwarded the file for perusal and advice whether to the ODPP for a decision to be made whether to charge the suspects or not,” a state prosecutor Christine Oloo told Shikwe. Ms Oloo said due to the intervening weekend it is prudent to indulge the ODPP the five days. Ms Oloo urged Shikwe to order the 16 suspects he had ordered be detained for 15 days for interrogation be remanded for five more days for the ODPP to study their file then give directions. Shikwe asked the suspects whether they were opposed to the application for a further detention. The riders opposed the request for a further five-day detention saying “We oppose the plea given we have been incarcerated since March 9,2022.” Each of 17 riders opposed the five days sought saying “they are too many and we have been suffering in custody.” Shikwe was urged to reduce the days and order they be charged today. “We came to court hoping this matter will be finalized and rested today. We need to be free to rejoin our families,” rider James Mutinda Muema told Shikwe. Muema prayed the five days be reduced to two to enable the ODPP to make a decision or not. Those arrested are Zachariah Nyaore Obadiah,James Mutinda Muema, Samuel Wafula Muswahili, Charles Omondi Were, Japheth Bosire Obano, Hassan Farah Forah, Wanjuki Lincoln Kinyanjui, Joseph Ngugi Mbugu, Lenson Fundi Njururi , Harrison Maina Irungu, Benjamin Ngure Githimii, Ignatius Shitekha Mufwolobo,Martin Kamau Maina, Shadrack Ambia Luyeku , Shadrack Kioko Nyamai, Cliff Gikobi Oyaro and Joseph Kibui Mukambi. In his ruling Shikwe granted the ODPP two days until March 28,2022 to make a firm decision whether to charge or not. But Ondieki warned that he will free Nyaore on bond if the prosecution does not present charges. Nyaore was arrested as he attempted to flee to Tanzania after he got wind police were looking for him. His photo published as the mastermind of the attack on the Diplomat. Eight suspects among the 17 told the magistrates they are not boda boda riders. They were arrested while waiting to board public service vehicles to proceed to their respective residences. All the suspects will be remanded at Gigiri Police Station until March 28,2022. Insp Mwanzia said they are being investigated for violent robbery and gender basede violence. Senior Counsel Philip Murgor is representing the UN Diplomat Tafadzwa Esnath Chiposi. Nyaore had been detained for 10 days while the 16 had been detained for 15 days. “I was arrested by police while passing through the scene of crime while proceeding to drop a client. My photo was then circulated in both electronic, print and social media depicting me as the key suspect. I was worried and fearing for my life then I decided to go into hiding,” Nyaore told Ondieki. Mr Murgor who is representing the UN Diplomat in the World Food Programme said “balanced but thorough investigations have to be conducted in the matter.” Mr Murgor did not oppose the police request to allow ODPP time to peruse and give advice on the file whether to charge or not. Mr Murgor is a former Director of Public Prosecutions. “You will be remanded at Gigiri Police Station until Monday (march 28,2022). Those who will not be found culpable will be released,” Shikwe told the suspects.