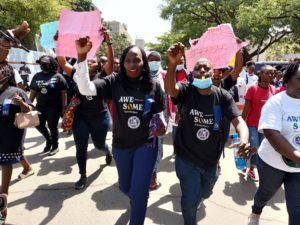 The Federation of Women Lawyers in Kenya (FIDA) staged a peaceful protest in Nairobi on International Women’s Day, in the wake of an incident where a female motorist was filmed being assaulted by a group of men identified as motorbike riders. Also condemning the incident was Amnesty International, led by quality campaign manager Diana Gichengo. She called on the authorities to come up with strategies to ensure all those involved in gender based violence are punished. Led by Faith Odhiambo, an aspirant for the Law Society of Kenya (LSK) vice-presidency, the group delivered a petition to the office of the Inspector General of Police and called for the arrest and prosecution of all Gender-Based Violence perpetrators. Also present at the protest was FIDA Kenya’s Executive Director Anne Ireri and Nairobi Woman Representative Esther Passaris. “The men and women of LSK will continue to uphold the rule of law and fight to ensure such perpetrators are brought to book and peace loving Kenyans transact their day to day businesses in an environment free from discrimination and the fear of being attacked out such criminal acts,” said Odhiambo. Police have arrested 16 people motorbike riders in connection with the assault incident. President Uhuru Kenyatta is among those who’ve publicly criticized the incident, and called for a crackdown on motorbike riders across the country.