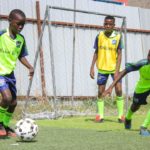 It’s a new dawn for junior-age football in Kenya as the Michael May Football Academy commenced training sessions at their newly founded training base in Nairobi’s Utawala estate. The project was officially launched by Nairobi governor Ann Kananu who described the project as an asset that will aid develop football. “This project will offer our youth employment. We will support it,” she said. Leading Nairobi Gubernatorial aspirant Richard Ngatia also lauded the owners of the academy for the investment. Embakasi East Member of Parliament Babu Owino said the academy was a move that would inspire more youths to take up sports which is today a multi-billion industry. “Setting the academy in Nairobi was a deliberate plan to have this county get in the way of development. We all support this move to have the Football Academy in Embakasi East,” Babu Owino Said Michael May Academy started training sessions a fortnight ago in Utawala after sealing a partnership program with Utawala Star Sports Club. The academy is set on establishing a permanent base in Kenya and aims to become the best football academy in the region. The football academy will focus on youth and children, to develop their football talent and provide opportunities for growth and scouting. They train every Wednesday, Thursday, and Friday from 10 am – 12 noon, during the holiday, and on Saturday from 9 am -11 am during the school term. To register your child, the academy charges Kshs 3,500 for training and Kshs 2,500 for a complete uniform set. Michael May Football Academy, which has its headquarters in the United Kingdom also has an academy in Nigeria and has now set foot in Kenya. Senator Beatrice Kwamboka said that setting up more football academies in Nairobi was a sure way to empower the youth in developing their talent. According to Football Kenya Federation Nairobi East branch Secretary General Dickson Doyo, the academy will be instrumental in developing football talent in the country.