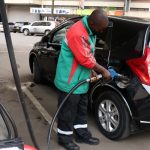 Kenyans on Twitter (KOT) shared their frustration after fuel prices rose to the highest price yet in Kenya’s history. This is after the government on Wednesday discontinued a subsidy scheme introduced in October 2021 aimed at easing public outrage over the high cost of living. The energy regulator — Energy and Petroleum Regulatory Authority (Epra) said the increase came on the back of rising global crude costs on petrol and diesel. This increased the price of petrol by Sh5 a litre in Nairobi to Sh134.72 while diesel has jumped Sh5 to Sh115.6 a litre, tying a historic high reached in September last year. The price of kerosene, mostly used in low-income households, was maintained at Sh103.54 per litre. “In the period under review, the pump prices of super petrol and diesel increase by Sh5 per litre respectively while kerosene remain unchanged,” the energy regulator said. “The prices are inclusive of the eight percent value-added tax (VAT) in line with the provisions of the Finance Act, 2018, the Tax Laws (Amendment) Act, 2020, and the revised rates for excise duty adjusted for inflation as per Legal Notice No. 194 of 2020.” The fuel subsidy scheme which is supported by billions of shillings raised from fuel consumers through the Petroleum Development Levy had kept pump prices unchanged for five months in a row. The government has been implementing the stabilization programme since April 2021 following a surge in global crude oil prices following increased demand. The levy cushions consumers from volatility in fuel prices but the sharp rally in crude oil prices in recent months has depleted the fund, this could see government fail to cushion Kenyans in subsequent monthly reviews. The regulator had kept fuel prices unchanged since October at Sh129.72 and Sh110.60 a litre for petrol and diesel respectively on fears an upward review could fuel public anger. Last month, Ministry of Petroleum Principal Secretary Andrew Kamau told Members of Parliament that the Petroleum Development Levy Fund (PDLF) that the state draws from to compensate oil marketing companies has only Sh1.2 billion left as at February 11. Mr Kamau further told MPs that the Sh24.73 billion the Ministry has been allocated to keep fuel prices stable in the supplementary budget is not a fresh allocation as it was allocated in June and has already been spent. Motorists in Mombasa will now pay Sh132.46 per litre of petrol, Sh113.36 for diesel and Sh101.29 while those in Kisumu will pay Sh135.13, Sh116.3 and Sh104.26 for petrol, diesel and kerosene respectively. Meanwhile, petrol will retail at Sh134.24 in Nakuru, Sh115.43 for diesel and Sh103.39 for kerosene, while motorists in Eldoret will pay Sh135.13, Sh116.32 and Sh104.27 for the three products respectively. https://twitter.com/ntvkenya/status/1503438052609466372?s=20&t=tBbHHz8gsr0l2SiChfoJXA https://twitter.com/infopap/status/1503372253311950850?s=20&t=tBbHHz8gsr0l2SiChfoJXA   https://twitter.com/jmueke/status/1501835534435598336?s=20&t=tBbHHz8gsr0l2SiChfoJXA https://twitter.com/ShurageM/status/1503619547311529984?s=20&t=tBbHHz8gsr0l2SiChfoJXA