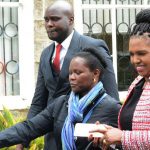 Keroche Breweries owner Tabitha Karanja says she spoke to Raila Odinga before settling to work with William Ruto ahead of the August 2022 polls. Karanja is gunning for the Nakuru Senate seat and has since announced she will fly the flag on Ruto’s newly formed United Democratic Alliance (UDA) party which she describes as popular in the region. “My team conducted a lot of opinion polls and we found out that UDA is the right political vehicle because my aim is not to try my hand in politics but win,” she explained in an interview on Citizen TV. “I’ve talked to everyone including Raila and he’d told me to wait after February, I waited but the ground has not changed.” Karanja stopped short of admitting that she was joining politics to try and safeguard her family interests even as she confessed the challenges facing the brewery have been caused by her competitors, whom she did not name. The beer firm is locked in a tax dispute with the Kenya Revenue Authority (KRA) leading to its temporary closure. The stand-off, she says, could lead to the loss of 250 jobs and beer worth Sh500 million. She maintains the company has paid taxes on time through its 16 years of existence. “Keroche’s current annual tax remittances amount to approximately Sh2 billion. The firm has been progressively working to capture increased market share, which at full capacity, would lead to remittances of annual taxes in excess of Sh10 billion and would create more direct and indirect employment for thousands of Kenyans,” said Karanja. The aspiring politician has appealed to President Uhuru Kenyatta to help settle the tax dispute even as Kenyans on social media had their say on the matter.   https://twitter.com/SenatorRuto/status/1499703977897828354?s=20&t=o-0gNTMWhdkKzAwxGUqAwg   https://twitter.com/NelsonHavi/status/1501426226933682176?s=20&t=o-0gNTMWhdkKzAwxGUqAwg https://twitter.com/johnnjenga/status/1501793049084579844?s=20&t=o-0gNTMWhdkKzAwxGUqAwg https://twitter.com/MarthaKarua/status/1501502308080828423?s=20&t=o-0gNTMWhdkKzAwxGUqAwg