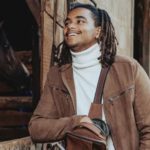 Kenyan celebrities are known to don unique hairstyles including dying of different colors, to rocking fire dreadlocks. Nonetheless, for long, and quite possibly to date, dreadlocks have been associated with Jamaican Rastafarians, as well as a particular aspect of unruliness. With the stereotype that is marked with the hairstyle comes a lot of judgment from many people, including employers. It so appears some of the Kenyan celebrities who were praised for their signature dreadlocks have decided to do the big chop on their long invested dreadlocks in 2022. In this article, we take a look at some of the well-known internet sensations who are now rocking short hair, having cut off their signature dreads. Sean Andrew Former president Mwai Kibaki’s grandson Sean Andrew set social media ablaze when he shared a video on his social media pages having cut off his dreadlocks. As many women were gushing over the content creator’s hot new look, others were melancholy as they highly identified him by his locks. Sean, on the other hand, explained his reason for dropping the dreads was because he did not appreciate being associated with the notion many people have about dreadlocks. He further stated that he is much more than his hair and that he no longer wanted people to identify him by his hair. Thee Pluto Content Creator Thee Pluto born Robert Ndegwa Kamau recently shared a photo on his Instagram page rocking a new trim hairstyle, with blonde dye at the tips, while holding his chopped-off dreadlocks in his hand. This sudden move by the self-proclaimed chief street sanitizer has left his fans in shock, all while still receiving great compliments. In an interview, the Instagram model revealed that it was his choice to chop off his signature dreadlocks as it was just for a change. “It’s just shaving. Change is inevitable. We are just rebranding,” said the entrepreneur. Luo Rapper Japesa Musical artist Japesa has shared in a recent post a photo of himself without his tail-dreadlocks, which in the photo the rapper was holding in his hand. In a caption, Japesa gave a vague answer as to why he decided to get rid of his signature hairstyle saying, “I know that’s what people say– you’ll get over it. I’d say it, too. But I know it’s not true. Oh, you’ll be happy again, never fear. But you won’t forget. Every time you LOVE SOMETHING it is because something in it reminds you of something, no cap!!!!”