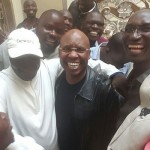 Businessman Jimi Wanjigi has opened up to the possibility of a political partnership with Deputy President William Ruto ahead of the August 2022 polls. Wanjigi, a prominent businessman, spoke in Nairobi on Wednesday after he formally severed ties with Raila Odinga’s Orange Democratic Movement (ODM) in favour of Safina party. “I’m open to working with anybody save for those who chased me away,” said Wanjigi, in reference to his recent ordeal at the ODM delegates conference. The businessman, who’d announced his intent to challenge Raila Odinga for the presidency through the ODM party, had a torrid time when he attempted to grace the political outfit’s delegates conference in Nairobi even as the party insisted he was not invited to the function. He was forced to run for his dear life after some of the party supporters bayed for his blood, accusing him of fighting Baba. “So if Ruto is coming to support my candidature, why not?” A Wanjigi, Ruto political alliance will signify a reunion of sorts. The businessman has maintained he helped President Uhuru Kenyatta and Ruto to form the Jubilee government at his Nairobi home in 2012. But the trio would fall out soon after, with Ruto later consistently referring to Wanjigi as corrupt at his campaign rallies in 2017. “In 2017, Kalonzo did not think that Raila would win the election but I convinced him to join Nasa. He felt that that would have been his best shot and told me that I spoilt it for him, he then declared that it would be the last time he was going to support Odinga,” the businessman noted. Wanjigi would then embrace Raila Odinga, then a critical opposition politician throughout the 2017 polls up until recently when they fell out after the businessman accused him of selfishly engaging President Kenyatta on the handshake deal.