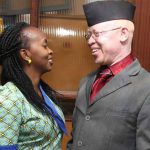 Isaac Mwaura recently opened up on the challenges he confronts in his marriage. The nominated Senator denies claims he’s fallen out with his wife but concedes their marriage is facing some turbulence. “I don’t think our (relationship) is immune to the challenges. We’ve had hiccups but work very hard to overcome them. We are currently very tight,” the politician told Mpasho. The vocal politician Mwaura also advises couples to make required sacrifices to sustain their marriages. “After around six or seven years, couples have challenges. We are now in our seventh year of marriage. We are happy and we will never hide what we have gone through and overcome.” Mwaura’s claims come months after his wife, namely Nelius Mukami, hinted on social media that all is not well. She wrote: “Removing yourself instead of returning negative energy is growth!” Then added in another post: “Fall in love with your solitude. If you treat your partner like a kid, they’re eventually going to grow up and leave you, the same way kids grow up and no longer need their parents’ control.” Mwaura and his better half exchanged vows in a lavish wedding and were later hosted by President Uhuru Kenyatta at State House for an exquisite reception. The couple would soon after suffer a natural setback after they lost two of their newly born triplets who had been delivered prematurely. Mwaura is the latest high-profile Kenyan politician to experience challenges in his marriage after Machakos Governor Alred Mutua and Meru Senator Linturi Mithika. Mutua parted with Lillian Nganga, his long term girlfriend, with Linturi is currently embroiled in a divorce care with Maryanee Kitany.