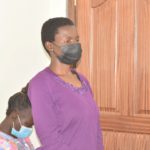 A house help who stole assorted jewelry worth Sh573, 411 from her employer in Nairobi pleaded guilty to charges of stealing by servant. Caroline Nabwire admitted stealing the items from Ventrapragada Nikhil on diverse dates between January 31 and February 28 this year. The items came to her possession by virtue of her employment and she sold them at throwaway prices. Nikhil’s wife went to their bedroom to collect the items for special prayers on March 1 only to find them missing. She telephoned her husband who was also shocked by the discovery. The jewelry was kept in safes that only the couple and their maid had access to. They ransacked the house and found more jewelry including bangles and rings missing from safes. Some of the jewelry had been replaced with fake ones. They reported the matter at Parklands police station. Nambwire was arrested and confessed to cops that she stole the items and sold them to a city trader. Police’s efforts to trace the trader and recover the items were fruitless as he dodged them. Nambwire pleaded guilty to the charges when she was arraigned before senior resident magistrate Renee Kitangwa of Kibera law courts. She will be sentenced on March 9.