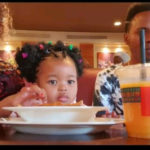 Vernacular gospel singer Stephen Kasolo has been forced to issue an apology after a video showing him threatening to kill a girl believed to be her daughter went viral. Kasolo reportedly made the threats after the girl broke ‘an expensive’ water bottle. “I want to take this opportunity to apologize to my baby @shinekasolo and all our fans for the video which is going viral, I never meant any harm to my daughter and never will, nevertheless it has brought tension on social media. Kindly forgive me this will never happen again I’m sorry even before God,” he said. In the clip, the Jitiye Moyo hitmaker is seen and heard telling his daughter to apologize for the mistake. He further warns her she risks being strangled next time if she repeats the same mistake. “Why do you play with such a thing?” he’s heard saying in Kiswahili. “Why have you broken it (the bottle). Do you know how expensive it is? Should I kill you?” he’s heard saying. “Do you want me to strangle you? Or kill you? The girl is heard saying ‘sorry’ before breaking into tears. The artist has also appeared to mend faces by sharing a photo of himself treating his daughter and wife to lunch.