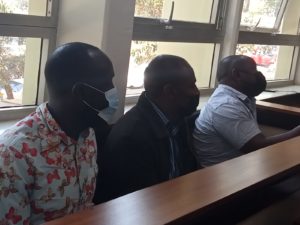 Three Directorate of Criminal Investigations (DCI) officers have been arraigned at the Anti-Corruption Court on charges of conspiracy to receive a Sh1 million bribe from a Chinese investor. The officers namely Charles Macharia Wanjiru, Samuel Yunnah Kukhuvilo, Joseph Gikara Gachera did not plead to the graft charges filed after the main suspect in the case namely Julius Onyango Oguma failed to appear in court. The trio is accused of asking for the bribe so as to forebear charging a Chinese man’s wife with an immigration offence. However, Senior Principal Magistrate Victor Wakumile ordered the Onyango, a police officer who skipped court attendance, to present himself on March 22 for plea taking. While differing the plea, the magistrate also allowed the suspect to engage lawyers and give them firm instructions in the matter instead of haphazardly dealing with the case. The prosecution says the officers fired in the air in a bid to obstruct Ethics and Anti Corruption (EACC) officers from executing their arrest. In the melee, one of the police officer Julius Onyango, a suspect, escaped. The four officers are facing conspiracy to commit an economic crime, receiving a bribe, obstruction, aiding a prisoner to escape, and robbery with violence charges. The officers are charged with receiving a bribe of Sh 1 million from Pan Xido Yan not to charge his wife Gong Huan with an offence of being in Kenya without valid immigration documents. The alleged offence was committed in November 28, 2018. In the second count, Onyango alone is accused of receiving a bribe of Sh 200,000 from Jane Wangu an employee of Yan inducement not to charge Gong. In the another count, the four officer are accused of obstructing the EACC officers namely James Wachira, Martin Mbuvi, Philip Major, and Alex Nyakundi from arresting them at Kabete police station by drawing their firearms and shooting in the air to scare them away. Machari, Yunnah and Kigara are facing a charge of aiding Onyango to escape from Lawful custody. Macharia alone is accused of violently robbing an EACc officer Philip Major Sh 7,000 and his job card.