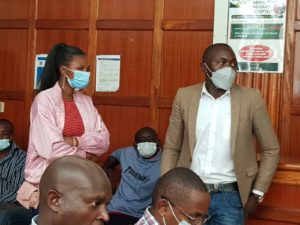 A magistrate has suspended the driving licence of a man who was captured on video driving a car with a woman passenger screaming for help. https://twitter.com/vannessapooh/status/1505452046153129986?s=20&t=B335ZbnExu8j_EIVPD9juw Milimani law courts Senior principal magistrate Esther Kimilu also ordered the 26-year-old businessman James Maina Kibe to pay a Ksh70,000 fine or serve one 1year in prison. The magistrate in her ruling said she considered the fact that the driver endangered other road users though there was no accident caused. “I have considered the facts of the case and the mitigation of the accused person and the fact that no accident was caused by the reckless driving of the accused. But I also consider the fact that he endangered other road users” ruled the magistrate. While mitigating in court after pleading guilty to the offence, James Maina Kibe told the court that the lady Karen Wanjiru a student at Kenyatta University was his girlfriend whom they had a slight misunderstanding. “Your honour she is my girlfriend and she is here in court, I pray for forgiveness” James lamented James was charged with one count of Reckless Driving contrary to section 47 of the traffic act cap 403. He is alleged to have committed the offence on March 19, 2022 at about 2300hrs along Thika Superhighway within Nairobi County. Court heard that James being the driver of a motor vehicle registration number KBJ 835Z made Toyota Probox did drive the said motor vehicle on the said road in a manner that was dangerous to the public and other road users. The traffic court further heard that James without having regard to all the circumstances of the case including the nature, condition and use of the road and amount of traffic which is actually at the time or which might reasonably be expected on the road drove the said motor vehicle while the passenger door was wide open and recklessly shifting. https://twitter.com/NPSOfficial_KE/status/1505934679786065929?s=20&t=B335ZbnExu8j_EIVPD9juw