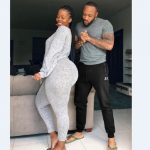 Socialite Corazon Kwamboka has opened up on what she says is her struggles with depression. Via a message on her socials, Kwamboka who also is a lawyer promised to share her depression story when she heals so as to encourage and give strength to other women. “Yes, I have struggled with depression,” she opened up. “What I’m going through is not easy, and I’m not the only one who’s gone through it,” she said. The comment comes barely a month after Kwamboka announced she’d parted ways with her baby daddy Frank Kiarie, commonly known as Frankie just Gym it. She also deleted photos of herself with him together from all the social media platforms. “I’m single. I choose me. Life goes on,” she posted. Days after their break-up, she heaped praises on her baby daddy for taking care of the kids when she was away. “Cheers to supporting fathers. Us moms can’t even be able to take such breaks if we didn’t have dads willing to step up no matter the situation. I appreciate you,” she wrote. In August 2021, Frankie proposed to Corazon during their vacation in Zanzibar to which the socialite said yes. Additionally, Corazon has been sharing that motherhood has been a bumpy road and that she never pictured herself having children due to having endometriosis.