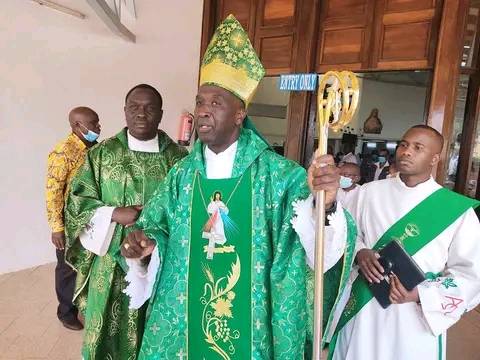 Eldoret Diocese Catholic Bishop Dominic Kimengich has appealed for peace and unity during and after the country’s general elections slated for Tuesday.

Bishop Kimengich also cautioned political leaders to abide by the law and desist from inciteful utterances that can raise political temperatures.

He challenged the political leaders to use the judicial process to get justice, should they feel aggrieved during the exercise.

He alluded to the 2017 court ruling where the Supreme Court that was headed by now retired Chief Justice David Maraga declared the results ‘null and void’ and ordered a repeat in the exercise.

The appex court nullified results and ordered a repeat of the presidential vote.

This was after the NASA brigade led by Raila Odinga moved to court to contest the results in 2017.

President Uhuru Kenyatta won the repeated elections that were boycotted by the opposition.

“Our appeal is that those leaders who have issues with the results should use the judicial process. In 2017, the courts annulled elections…. This means that our leaders now have faith in the judiciary,” added the bishop.

The members of clergy and congregation across the country used Sunday to preach peace and pray for the peace as the country heads to the general polls.

“Our message is that we want peace during and after elections. As voters go to choose their leaders, our appeal is that we have peaceful elections” he observed, during a mass at the Sacred Heart of Jesus Cathedral Eldoret.

He noted that the region has borne the brunt in the past but they are now championing peace so that all the residents in the cosmopolitan county continue to live in harmony.

At the same time, the bishop challenged all State Agencies tasked with the elections including IEBC to deliver credible results.

“We have about accusations but we want to plead to all the agencies to deliver credible and fair polls. With credible elections, no one will raise complaints,” said the bishop.