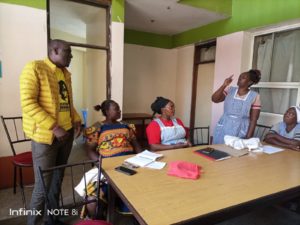 A city politician has hit out at three women leaders for safeguarding the interests of the rich at the expense of the vulnerable. Sam Mundia, an aspiring Member of County Assembly (MCA) for Central Business District (CBD) ward on a Kenya Kwanza ticket, spoke to Nairobi News on Thursday, hours after Nairobi governor Ann Kananu, Chief Administrative Secretary (CAS) Rachel Shebesh, and Nairobi Women Representative Esther Passaris hit to the streets to protest over what they termed is foul language against former First Lady Mama Ngina Kenyatta. These protests were in response to a video clip believed to be of a Kenyan in the diaspora hurling insults at the former First Lady, who doubles up as the mother of President Uhuru Kenyatta. “It is their right to demonstrate but I don’t understand where they (women politicians) are coming from,” explained Mundia. He added: “We’ve had instances where women had their businesses and homes demolished in Embakasi and Ruai and these women leaders kept quiet. They’ve never complained about the rising food prices, nor have they shared a comment on the challenges facing the girl child including lack of sanitary towels. But now they are defending those that are able to defend themselves.” During the demos, Shebesh urged politicians not to abuse the family members of their colleagues. “We should Politik with respect. I do not understand why you should abuse a politician’s parent or brother. People should also refrain from embarrassing women in front of their children and husbands,” she said. “Mama Ngina has a right to speak about Kenya’s politics. [by virtue of being a woman], she represents 50 percent of Kenyans’ collective views,” added Passaris. Mama Ngina this past week appeared to endorse Raila Odinga for the presidency, at the expense of Uhuru Kenyatta. Odinga alongside Deputy President William Ruto are considered front runners to replace President Uhuru Kenyatta ahead of the August 2022 polls.