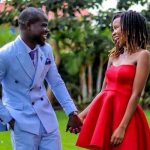 Comedian Mulamwah’s ex-girlfriend Carol Sonnie has featured in singer Madini Classic’s latest song dubbed Bingo Bango, breaking dating rumors that had surfaced prior to the release of the video. Barely a week ago, the artist had shared a photo with the actress while they were cozying up to each other and captioned, “Call me Mr. Polygamous. Wife Number 2,” which stirred up quite a storm of comments from fans. Drawing from the post, netizens made the speculation Sonnie had also moved on and started dating the singer, who is married to one Nelly Mwenda. Sparking more rumors, Madini’s wife Nelly took to her social media pages to lament and expose the singer for being a cheat and betraying her by going for Mulamwah’s ex-girlfriend. The singer, however, opted to steer clear of the matter as he did not respond to his wife’s posts. Sonnie, however, did not find it entertaining to sit back and watch her name be dragged in the mud by internet users. The actress shared a snippet of the then-upcoming music video to the song on her Instagram page and captioned, “Don’t be fooled, it’s a music video. It’s really sad how some individuals are taking advantage of all this and trying to tarnish my brand. I’ve been quiet but this doesn’t mean I’m stupid. Hata Kama Ni Kiki this has gotten too far. Wacha heshima idumu na tupige kazi bila makasiriko!!!! The internet sensation went ahead to issue an apology to her fans for the misunderstanding that was brought about by other parties, adding that it was purely business. “To my fans, poleni for the misunderstanding that was brought by the other parties. This is purely working. Don’t be played!” The actress shared a video of the song on her Instagram saying, “Aah wimbo mtamu, alafu your girl did her thing, uweh kua video queen si mchezo.” “Aah sweet song and your girl did her thing. Being a video queen is no joke.”