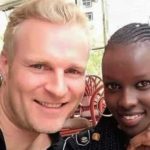 A Belgian national who surprised many by gifting Kenyan women millions of shillings has sneaked out of the country. The billionaire, identified as Marc De Mesel, is wanted by authorities over his involvement in an alleged money laundering scheme as he has a case in court filed by the Asset Recovery Agency (ARA). ARA through its lawyer Stephen Githinji said Mesel sneaked out of the country through the Namanga border and entered Tanzania before fleeing out of the region. The Belgian is being investigated by ARA after he gifted his fiancé and her close family member Sh650 million. Mesel is said to have sneaked out of the country with his girlfriend known as Felista Njoroge, a university student that he gave Sh102 million. “He is a person of interest who we suspect is recruiting young Kenyan girls into an international crime racket,” ARA said. According to the state agency, Mesel remained a mystery as he was nowhere in the country and how he managed to cross into Tanzania shocked its officials. ARA believes that Mesel is part of an international syndicate that is involved in money laundering and hands the cash to Kenyan women who assist in withdrawing the cash. Some of the members of the syndicate are located in the west including countries like Belgium and Germany. Another woman identified as Jane Wangui is also being investigated after the Belgian handed her Sh49 million. According to Wangui, she received the money from Mesel who directed her to build a house for her mother and also expand her business.