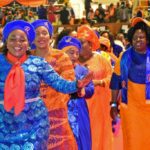 Senator Beatrice Kwamboka has backed Raila Odinga to tackle and resolve the health care challenges in the country while urging Kenyans to elect him as the next President. Kwamboka who is gunning for the Nairobi Women Representative seat, spoke on Thursday while on the campaign trail in Dagoretti South and Westlands. “Baba (Raila Odinga) has an elaborate program to solve the healthcare problems we face. He will implement the Baba health care program which caters for everyone including those in the villages and slums,” said Kwamboka. Odinga is involved in a tight race against Deputy President William Ruto, his former political ally, as they both bid to succeed President Uhuru Kenyatta ahead of the August 2022 polls. Besides Odinga, Kwamboka, a former Mountain View MCA, also rallied Nairobi residents to vote for Azimio la Umoja aspirants in the polls. “Apart from Babacare, Raila has also promised his government will give Sh 6000 to every person without employment every month in the social protection program. Whether you work or not, as long as you are poor and unemployed, Raila’s government will give you 6000 shillings to feed your family,” she said. “Our candidate has also promised to seal all corruption loopholes and that money will be used to give a stipend to the destitute. That with the Babacare healthcare system is reason enough to elect Baba.” The vocal Kwamboka, who is considered among the favorites to win the Nairobi Women Representative seat, called on the residents in the vote-rich constituencies to turn up in their numbers and elect Azimio candidates from the Member of the County assembly to the presidential ballot to ensure that the former Prime Minister has the requisite numbers to run government and implement the desired change that he has promised Kenyans. The rallies being held in various parts of Nairobi are part of planned meetings to popularise the Raila Odinga presidential bid even as the seasoned politician continues with his tour of the United Kingdom.