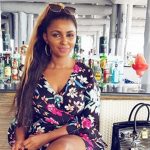 Keroche heiress Anerlisa Mungai says she was offered a chance to be featured in the new Netflix reality series Young, Famous and African only to turn it down. Responding to a fan who endorsed her as the Kenyan celebrity who should represent Kenya in the next season of the show, Anerlisa said the organisers reached out to her but she was not interested. “No jokes aside, they sent me an email asking me if I was interested to be in it but I turned it down,” wrote Anerlisa. Anerlisa is daughter of Tabitha Mungai, CEO and owner of Keroche Breweries, one of the biggest breweries in Kenya. She’s severally hit the headlines owing to her opulence on social media and challenges in her private life. The show, which premiered on Friday March 18 is the first unscripted African reality series on Netflix, with seven sizzling episodes featuring some of the continent’s biggest and baddest personalities. Young, Famous & African cast is made of a few select stars from South Africa, Nigeria, Tanzania and Uganda as they manoeuvre tempestuous love lives, feuds and demanding careers in the city of bling, Johannesburg, South Africa. The show gives fans a ringside view of African celebrity at its most dramatic, charismatic and extravagant. This all-African reality series includes power-couple 2Baba and Annie Macaulay-Idibia, celebrity stylist Swanky Jerry, actor Khanyi Mbau, musician Diamond Platnumz, rapper Nadia Nakai, businesswoman Zari ‘The Bosslady’ Hassan, broadcaster and TV producer Andile Ncube, and radio jockey Naked DJ.